Fire Building Techniques #1 (How to Build the Firepit)

Fire Building Techniques #2 (How to Start a Fire)

When in the wilderness, usually the first things people think about are food and water.  These are very important concerns.  I would say that another concern of almost as much importance is making fires in wilderness.  Fires provide warmth, safety, and morale boosting.  On many occasions, a good, well placed fire will be the difference between life and death.
Fires in the wilderness can be quite a task.  They take patience and hard work, but once you get one going, there isn’t much that will make you more proud.  My list will probably not include every type of fire starting, so if you want to add any methods to the comments, please feel free to do so.
Before getting into the other methods, maybe we should discuss the basic building of a fire to assist in success.  In fire-making, about 80% of it is preparation, and about 20% of achieving a starter ember.  If you fail to prepare the pit or area for your fire, you will have a hard time keeping it lit when it needs so much care in the beginning.
It is best to find a large dry area that can be taken down to dirt with at least a 3 foot diameter.  This spot should fairly protected from wind.  Then build a firewall out of rocks or similar usable materials.  Depending on where you are building this fire will determine your materials and ease of building one.
You will need tinder, kindling, and fuel on site prior to striking.  Kindling will be a small, dry, large surface area or easy burning item.  Good examples are dried birch and cedar bark, cattails, wax, lint, charcloth (self-made), moss (dried out), wood shaving from your knife, or even dried straw and pine needles (which aren’t quite as good).  Tinder will burn very fast, so you must have your kindling on hand.
Kindling is larger than tinder, has more weight to it and will burn longer and hotter.  It is added to the tinder once it is burning.  Kindling can be small dried branches, or small pieces of wood.  If you shave dried wood but leave all the shavings attached, it can also act as kindling and fuel; these are called “fuzz sticks”.  It is designed to build the size and heat of the fire to a point to ignite the fuel.
Fuel is generally firewood.  It can be dried logs found, animal dung, or peat.  It will burn hotter and much longer that kindling.  Usually the test of energy in a wood is how heavy it is when DRY.  Heavier DRY wood will have longer and hotter burning.  Most of the time, it will burn cleaner as well.  It is usually hard-woods (oak, hickory) that we use for this, if given a choice. 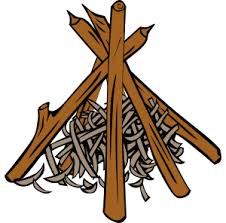 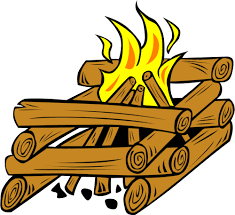 Another way that I like is to build a “log cabin” using the same concept as Lincoln logs.  Build a fire on top (a small tepee) which is best for cooking because it causes uniform heat by using the chimney effect.

The pyramid is done by placing a base of 2 logs.  On those, you make a layer of parallel logs and then another layer perpendicular to that one, and another, etc. each with slightly smaller sticks that the one below it.  The fire will burn down instead of up.  This requires little to no attention through the night.
Tomorrow we will learn how to start a fire using primitive methods and will bring it together with this one.