Backup Battery Bank #4 (Auxiliary Devices and Wrapping It All Up) 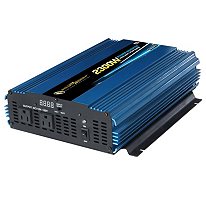 If you havent read the post on Batteries, please do so.  This works off of that blog entry.  I will give basic information on inverters and I have to give a little technical info to help in understanding your inverters.
First thing to know about inverters, is that the cheaper inverters are modified sine wave inverters.  If you want a true sine wave inverter, you will pay a premium for the same amount of capacity.  I will not be discussing the intricate grid-tie and syncronous inverters.  Although I have the background, The purpose of this is to give basic, easy to understand information so everyone can get a backup bank going.
In my opinion, a small inverter is more important than the batteries as the first purchase.  You can connect the inverter to an automobile battery while the car is running so the alternator is supplying all of the power.  BAM!  you just made a gas or diesel generator, of a lower capacity, and at a much lower price tag.
Modified sine wave inverters (MSW)  give a “blocky” looking AC sine wave, where as true wave inverters give a smooth one.  Most electronics will run on a MSW inverter since they always turn that back into DC prior to use anyways.  Most motors will work on this as well, except syncronous motors, but almost all motors used around the house will work fine.  Don’t run audio equipment on it.
Ok, typically inverters are 12 volts dc in and 120 volts ac out.  the wattage in and out are the same.  Watts=Voltage x Current.  Which means current=watts/volts.  so if your volts go up, your current goes down to make the watts the same.  At 120 watts, the current available will be 1 amp at 120 volts.  So, at 120 watts, the current required from your battery would be 10 amps.  If you are supplying from an alternator, this amp will determine how big an inverter you can put on your car.  If you are using a battery bank, then you can use the amp to determine how long before you drain your battery.  100 amphour battery at 10 amps will last 10 hours.
So we want to limit the loading on the inverter as much as possible, which means using LED lighting.  A cheap way of doing this is using LED christmas lights.  Using newer electric heating blankets instead of your 5 ton heater is needed.  Rule here is to heat and cool the PERSON, not the space.
Start with a smaller inverter.  The “sweet spot” on capacity versus dollar is usually 800 watt and 1500 watt inverters.  You don’t use 800 watts when you have an 800 watt inverter.  You will only make and use whatever you plug into it.  At the bottom I will show some links on inverters I like.
I would limit the inverter to 400 watts when plugging into your car adapter outlet, limited by the automobile wiring.  I would also limit a direct battery connected inverter to 800 watts, since this is near the limit of a typical alternator, and you don’t want to deep cycle your car battery.
Just to give mention, if you wat to tie your solar system to your grid, you will generally use a grid-tie inverter or a syncronous inverter.  They copy the power coming in so you don’t go out of phase and blow stuff up or cause fires.
Remember, If you have any questions or blog subject suggestions, you may email me, comment, or post on my Facebook page.
Good Links:
Inverters I recommend for direct lighter/ 12 outlet connection:

What I would recommend the following for direct battery connection, if you want an alternator to produce all the current for it:

If you want to go bigger on a battery bank, you can, but you need to remember to keep your loads as low as possible to maximize the life of your battery bank.